The Risk Of A Rate Rise 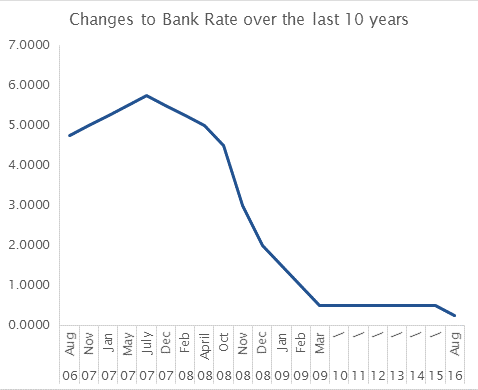 The Governor of the Bank of England, Mark Carney, has suggested interest rates on borrowing could go up as early as November. The last time rates were raised was July 2007. Since then interest rates have been kept low in order to boost the economy by keeping cost of borrowing down however changes to the economy caused by Brexit allied to the increasing levels of Household debt have caused concern for the BoE monetary policy committee. “What we’re worried about is a pocket of risk – a risk in consumer debt, credit card debt, debt for cars, personal loans,” he told BBC Radio 4’s Today Programme last week.

He said banks had “not been as disciplined as they should be” in their underwriting standards and pricing of this debt.

The next opportunity for a change in interest rates is the Bank’s monetary policy committee meeting on 2 November and although this rate rise would not be because of debt created by the Housing Market it is here that most consumers will feel the impact. We therefore asked our Brian Gilmour for his thoughts on the likelihood of a rise and the consequences.

Q Is an interest rise likely? How long has it been since there was one?

Mark Carney has indicated that a rise is likely due to the increase in UK consumer debt levels.  There hasn’t been a rise since the middle of 2007 with rates at record low levels.  The current rate is a record low of the last 325 years.

Q Should people look at getting a new mortgage before the rise?

We are only talking about a rise of potentially 0.25%  That would take us to 0.5%.  That is still exceptionally low but the longer the rates remain low, the closer we become to a rise and some lenders have already priced a rise in with 2 year fixed rate mortgages rising in June & July in expectation.  Remember – when we (the consumer) gets to hear it there will already have been rumours in the city.

Q Is this bad news for first time buyers?

As these rates are at 325 year lows, we should not be making mortgage plans to scrape by at these levels.  Mortgages re for 25 years plus so look back over the last 25 years and see what the peaks and troughs have been and anticipate that the next 25 years could look the same.

Q Is this bad news for everyone?

Q If you are on a variable mortgage should you look at getting a fixed mortgage?

It’s a personal decision based upon your attitude to risk and it is always best to speak with an independent mortgage advisor.  Variable rates will be lower than fixed rates so you can take a gamble that rates will only rise by the forecast 0.25% (or maybe 0.5% over the length of an alternative fixed rate).  Equally many prefer the certainty of fixed budgeting and knowing what your mortgage payments are going to be regardless of “hedging the market”.