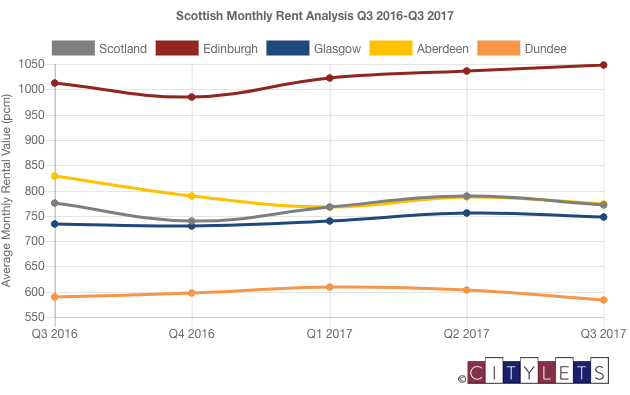 As we enter the final quarter of 2017, leading property rental website Citylets have produced their quarterly report to the end of Q3 2017. The figures show a slowing of the monthly growth that has been experienced across most areas of the Scottish rental market.

The quarterly records from Citylets illustrate a slowing of annual growth in the central belt resulting in mild negative growth for the country as a whole at 0.4%. Rents in Aberdeen continued their current stabilising trajectory at minus 6.6% year on year.   Edinburgh recorded 3.5% growth with Glasgow up 1.9%, a fall from 5% last quarter. Markets in other major areas including Dundee, West Lothian and South Lanarkshire recorded mixed fortunes with Renfrewshire posting notable 4.9% annual growth.

With the figures in we asked our Brian Gilmour of the BBC Radio Scotland Kaye Adams Programme for his thoughts on the report.

What are the major influences on rental prices?

Rental prices are driven by the basics of demand and supply. Over the last 10 years we have seen fewer new private landlords into the market (compounded by the 3% LBTT surcharge), the difficulty of getting mortgages and continued low levels of social housing being constructed – there are just over 160,000 people on housing waiting lists in Scotland.  These factors of increased demand and decreased supply have pushed up rents in the private rented sector.

Where have we seen the biggest rise and falls in Scotland?

Over the last quarter we have seen the changes in rents start to level off so that the month by month rises have stopped. Over the past 12 months we have actually seen rents in Scotland drop by 0.4% but this is skewed mainly by the large drops in Aberdeen and drops in Dundee (which have strong rental markets). Rents in Aberdeen specifically have fallen 6.6% in last 12 months and 27.5% in the last 3 years whilst Edinburgh and Glasgow have seen rises of 3.4% and 1.9% in the last 12 months and 19.6% and 11.7% over the last 3 years.

Where do you see this going?

As the above shows there has been big increases in the last 3 years. This is probably a bit of catching up over a fairly stagnant market prior to this and also landlords covering costs of all the legislative changes during that period. Rents are tied even more closely to wages than mortgages and house prices and these recent rises have been above wage inflation. We’ve also seen chat of Rent pressure zones and changes to benefits which will all flow through to the inability of rents to increase exponentially.

Will the expected rise in interest rates have a bearing on rental prices?

Such a rise often does. Most landlords will have a buy-to-let mortgage and therefore an increase in their costs is often passed on to tenants. Interest rises however usually coincide with wage inflation but that is not the case this time so a rise in interest may not necessarily result in a rise in rents.